The Eye of God Nebula 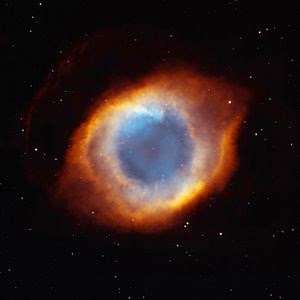 Is the universe flat? According to some astrophysicists, cosmologists and NASA scientists, the potential for a flat universe is a possibility not to be discounted.

This and other highly unorthodox theories about our universe can and have totally upended our conventional beliefs about reality - just as Einstein's General Theory of Relativity in another era upended Isaac Newton's once held sacrosanct scientific observations. And now Einstein's own theories are coming in to question with each new discovery concerning the complexities of the cosmos.

Like for instance the possibility that we live in a multiverse as opposed to a single universe. And that we humans - as carbon based life forms can - like sub atomic particles - exist in more than one place at a time, living out alternate scenarios of our lives - not as reincarnated beings as some believe - but as living entities with duplicate versions of ourselves replicated throughout the cosmos in a series of parallel universes.

Parallel universes which, by traveling through time, can be accessed through portals, wormholes or even by some serendipitous fleeting thought or signature psychic signpost.
In some extreme cases - a parallel universe in which, though separate and normally inaccessible, a couch potato can share the same living room space with prehistoric mastodons from an unseen invisible alternate dimension. The not-so-simple fact is when it comes to the cosmos, "It's a jungle out there."

Impossible you say? Ridiculous? Absurd? The looney tune ravings of some non-compos-mentis! Hardly - but rather the seriously contemplated theories held by the most brilliant minds of the 21st century, who are even now recreating The Big Bang in search of the mysterious and elusive God Particle.

According to the late Carl Sagan and author of the science fiction novel Contact - "somewhere, something incredible is waiting to be known."

There's a strange serendipitous synchronicity between science and certain long standing myths, legends and tall tales which tend to support the veracity of the unearthly aspects of fables and shaggy dog stories. Stories that might have once been considered the product of overactive imaginations and mankind's unrelenting efforts to escape the limited spectrum of linear reality. Now lo and behold the frontiers of science have finally elevated the fairy tale aspects of reality above what astrophysicists call "The Giggle Factor."

Seers, story tellers, sages, shamans and yes, even born-again Barnum's can reveal their truths without fear of ridicule or the Herculean effort of a suspension of disbelief.

And so in keeping with the words of William Shakespeare who expressed the following sentiments long before space travel was even a gleam in Werner Von Brawn's eye. "There are more things in heaven and earth, Horatio, than are dreamt of in your philosophy."

The Millennial Shakespeare Of Advertising


The Marvelous, The Unexplained and The Absurd


The Surreal Super Heroes of A Lost Kaleidoscope Frontier


The Leader Of The Paranormal Pack
The Mad, Machiavellian "Mama Mazeppa"


Her Own Self Styled Utopian Underworld


In The Primitive & Perilous Parallel Universe