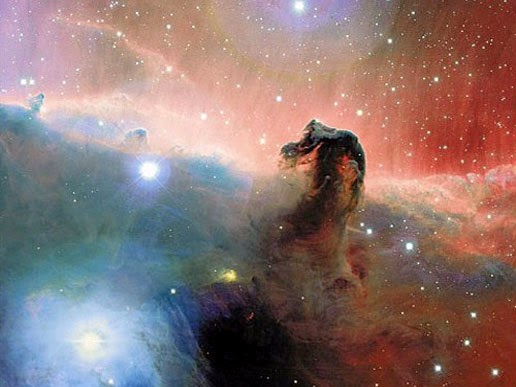 Just as the atom is key to BARNUM'S EXCELLENT EXOBIOLOGICAL EXTRAVAGANZA,

As the atom is key to the universe, so too is "CHANGE" its modus operandi, the result being with the cosmos in a constant state of flux and for the most part invisible to the naked eye, what we, as carbon based life forms perceive as our reality, is little more than an optical illusion.

A FOOLS GOLD perception of the so called "REAL WORLD". An Intergalactic House of Mirrors and Cosmic Shell Game about which the average obtuse earthling is basically "clueless". Which is what prompted a certain slight of hand artist, an Ivy Island Entrepreneur by the name P.T. Barnum to say- "there is a sucker born every minute!"

As for Barnum himself, Irrespective of his many faults and there were many..."In the land of the blind, the one eyed man is king." Which is why this Beatified Bunko artist chose from within the context of " A Horse Opera and Three Ring Circus" to fool, trick, conjure, enlighten, bewilder, shock and amaze the blinded bourgeoisie out of their customary complacency and the residual after affects of Victorian Repression, Puritanical Pretensions and Bigoted Religious Perspectives.

In an era in which entertainment was considered sinful and entertainers thought to be in league with the devil, along with such satanic pursuits as eating minced pie and celebrating Christmas…pagan preoccupations which could conceivably damn you to the eternal fires of hell- the narrow minded zeitgeist of "Primitive Americana", having been carried over from the dark ages and derived from the inquisition, literally put Barnum between a rock and a hard place. It required this one of a kind nineteenth century entrepreneur to present his Museums, Horse Operas, Multiple Ring Circuses and ad hoc cultural events within the self righteous context of a "Morality Play" and "Educational Exhibit". A spectacle charged with the lofty dual purpose of protecting the morals of its patrons and enlightening them as well. In order to pass muster with the nineteenth century version of the moral majority or red white a blue Taliban, Barnum's latter day circus ventures had to be presented as a "Sunday School Show" and "Edutainment" Type Spectacle. The only format deemed acceptable to the church going establishment who, apart from their pious demeanor's were like "Whited Sepulchers". Full of dead men's bones.

A "Must See" educational exhibit with "No Child Left Behind". Without which no one could be said to have had a complete and proper education. Obviously a stretch, even for an accomplished "Prince of Humbug". And complete it was and like no child left behind-no gross me out celebrated anomaly, human atrocity or freakazoid phenom, either real or contrived was left out of " The Shakespeare of Advertising's" Herculean effort to sell " advance sale tickets" and thoroughly exploit the salivating masses "thirst for knowledge", hunger for the forbidden an appetite for the grotesque. A hunger that was apparently insatiable, suppressed as they had previously been by those who obviously had direct communication with the "Almighty". That body politic of stiff necked establishment hominids who walk upright, but according to those of us who are "with it" - can't see the forest for the trees. An attitude reflective of a disparaging lexicon of demonizing terms which go far beyond "Sucker". I'm sure you've heard them all before. Every new book, TV series or movie regularly regurgitates them, like some rare archaeological find which supposedly legitimizes the latest embarrassing "Gajo" or "Contrasti" Big Top revelation and supposed insight into a world they can't possibly begin to penetrate. A world which, like the layers of an onion tells more tales than Scheherazade and like Thurston's Geometrization Conjecture takes on as many different mobile shapes and colors as the living Kaleidoscope that it is. For those of us who long ago "Stopped The World and Got Off ", there is only one truth and it's ours and ours alone. As simplistic as it sounds - ours is a religion in which there is no separation between church and state, its principal precept being, the "Show Must Go On". It's overriding religious mandate - get the show on the road, be it route 66 or the information super highway. And only one political affiliation, " My Big Top Right or Wrong." " My Circus Big or Small" Apart from that- everything else falls off the radar of midway consciousness. We live sequestered lives within the protective canvas cocoon of our own primitive and eclectic primary culture. A counter culture that protects us from the madness of that much larger industrialised society that exist beyond the borders of our Midway. Ours is a sovereign nation of diverse "Outsiders". Outsiders who seek no common ground with the establishment apart from whatever currency they can provide for whatever entertainment, enlightenment and paranormal events we have to offer. We are- after all- the Socio economic Extension of the Paranormal. A creative social anomaly whose existence in the here and now extend beyond time and space and the limited perspective of linear reality. A curious and diverse counter culture which is a universe unto its own within which there exists a Heinz 57 variety of alternate circus realities which fall into the context of that Kaleidoscope Frontier for whom"The Horse" is at the center of consciousness. A consciousness founded on the belief that is was from the back of a horse that mankind first began to realise the true extent of his potential and experience an altered perception of his surroundings. A surrounding environment by which he was no longer trapped. Liberated as it were, because of the new found mobility afforded to him by " Equus Caballus". Our very first "Voyager" A symbiotic voyager that was their singular serendipitous gift from God.

After Barnum's death, his "Sunday School Show" was absorbed into the Ringling Brothers and Barnum & Bailey Circus. A circus which, in the 21st century still retains its authentic and well earned title of "The Greatest Show on Earth" and to this day represents the gold standard to which every "Horse Opera" aspires.

But- at the opposite end of the spectrum- there exists a Circus which is definitely not for children of any age. A polar extreme which offers a different kind of "EDUTAINMENT". For adults only. A circus as infamous as the goody two shoes version is famous. As dangerous as any death defying high wire act Carl Wallenda didn't survive. As mysterious as any of Harry Houdini's great escapes. As romantically star crossed as Lietzel and Codonna's doomed love affair. A circus from whose wicked vortex of violence and vice, few ever return-dead or alive. Beware all ye who enter here...

But if you are so fool hardy as to risk that one way ticket to perdition... You will learn...as others have, that in life, as in the circus ring....what goes around...comes around...

And for every Citizen Screwed and discounted minority of one... there's the Beelzebub Blowback Syndrome and Bad Ass Butterfly effect called "THE CIRCUS OF LAST RESORT" where the unmarked bodies of "Suckers, Marks, Mooches and Rubes" still lie buried under " The Menagerie Manure Pile".