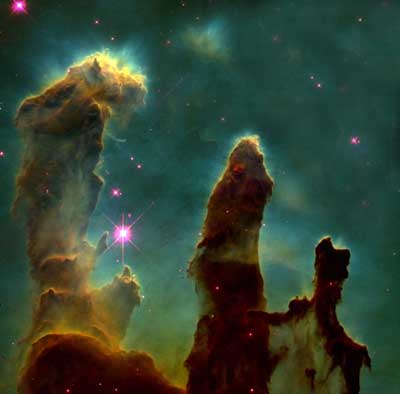 "The Eagle Nebula, also known as: The Elephants Trunk"


There are 100 billion galaxies in the visible universe, with billions more beyond - which we can't see. In a Universe which seems to be infinite, some scientists theorize that within our mind boggling cosmos - there may be as many as 11 parallel universes. According to the official dictionary of the Associated Press the word EXOBIOLOGICAL means the act of investigating the possibility of life and the effects of extraterrestrial environments on living organisms from Earth.

A psychologically subversive cyber spectacle intended to challenge your suspension of disbelief, compromise your faith in linear reality and totally debunk that 3 dimensional world by which all Citizens Screwed are unwittingly held hostage. Just as a 19th century Barnum once brought Grizzly Adams to Broadway from the distant Apocraphyl Theater of America's mythical Wild & Wooly West (a place that existed as much in the imaginations as it did in the Natural World) so too does a NEW AGE BARNUM bring A WILD BUNCH OF A DIFFERENT PERSUASION to THE INFORMATION SUPER HIGHWAY from a mysteriously hidden and artfully obscured oasis situated somewhere in the vast expanses of ELSEWHERE.

A dark, derelict domain and DYNAMISTS PLAYGROUND ruled over by the rough riding weapons of mass distraction. That Wild Bunch of a Different Persuasion destined to invade our dreams and occupy our nightmares.

The EXTRA TEMPESTUOUS, EXTRA TERRESTRIAL TURNVEREIN TIME TRAVELERS from the space time continuum of a former unfathomable wilderness. The magical and elusive Mountain Man's NATURAL WORLD. "THE GREAT MAP OF THE MAGNIFICENCE" which once was and is no more, except for an absurd alien extension of a geographically intangible West of The Pecos World of curious and outlandish QUANTUM POSSIBILITIES. A SPOOKY 6 GUN PSYCHEDELIC OUTLAW UTOPIA floating on the fringes of fantasy and the Badlands Borders of a dangerously deceptive Parallel Universe where nothing is as it seems, no one is who they appear to be and everything is as it could never have been in any other Paradigm of Reality but ELSEWHERE.

In The Magically Distorted Wonderfully Warped World of a Lost Kaleidoscope Frontier suspended in Space, (like the invisible monster of our own Milky Way Galaxy - a black hole whose existence Einstein doubted) this perverse parallel universe and alternate outlaw dimension exists within an inescapable vortex wherein the laws of Physics do not apply and the rules of any kind are not applicable. It is that nowhere place in the mind's nightmare alley in which God plays dice with the Universe.

BEWARE ALL YE WHO ENTER HERE

This is NOT your Grandfather's Barnum!